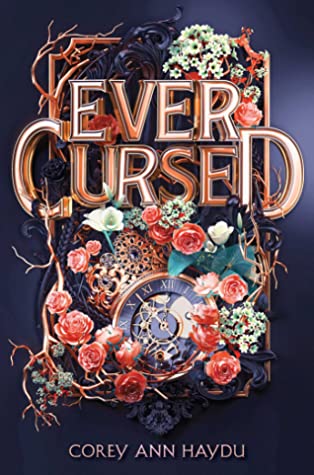 Many thanks to Simon Pulse and NetGalley for the ARC! This book will be published on Saturday August 1 2020.

Ever Cursed is a young adult, feminist fairy tale that deals with some heavy subjects, most notably sexual assault and disordered eating. Corey Ann Haydu provides a content warning at the beginning, which immediately gave me a positive first impression of her and the book. As someone who is easily triggered by one of these, I appreciated it so much and I know a lot of other readers will too. Overall, Haydu handles the difficult topics very well. She does a particularly great job showing how people often turn a blind eye to sexual assault. A large portion of the plot is about bringing it to light and forcing the perpetrator to face consequences.

Haydu has created a truly fascinating and unique world. The naming of the countries and various places and events contributes to the fairy tale feel of the book. Countries are called Ever and AndNot, the witches live at the Home on the Hill, and the princesses are cursed with the Spell of Without. Some could find it jarring at first, but I found it quite charming. But the true star of Haydu’s world is the magic system. When witches cast a spell, a new skirt magically appears around their waist. The material of the skirt depends on the severity of the spell cast. A minor spell results in a lightweight material while a major one with dire consequences, such as the one Reagan places on the princesses, results in a heavy material like burlap. If a witch casts lots of heavy spells, she might find herself unable to move due to the weight of her skirts, which is what happens to Regan’s grandmother. It’s so different from anything I’ve seen before, and I loved it!

This is the closest I have ever come to seeing eating disorder representation in fantasy literature. Due to the Spell of Without, Princess Jane is unable to eat. Now, this is not actually an eating disorder since it is magically induced rather than a mental illness, but the harrowing physical and emotional consequences are mostly the same. I noticed that several of the princesses’ curses match up with some kind of disorder or mental illness, including depression, insomnia, and dementia. Sometimes it’s easy for issues like these to be romanticized in fiction, but Haydu avoids that; it is very clear throughout that these are serious and dangerous problems. In fact, she takes it a step further and critiques the romanticization of these disorders and illnesses that occurs especially when they appear in women.

My biggest problem with Ever Cursed is that the characters’ voices aren’t distinct enough. The first person narration switches between Jane and Reagan for each chapter. I found that their voices sound essentially the same and I frequently forgot whose point of view I was reading from. In general, all of the characters would have benefited from a little more development. It was difficult to connect with them or even care about them in some cases. Reagan in particular I really just disliked the whole time. I also found the ending rushed and anticlimactic. Honestly, I’m not entirely sure how or why some things happened at the end. While one major issue is resolved, there are a whole host of smaller problems that are glossed over and suddenly all better just because.

Overall this is a feminist fairy tale that takes on some difficult topics quite well. Despite it’s flaws, it’s definitely worth checking out.